Car Hire Champion and creator of moneymaxim.co.uk. Mark is an expert in the Car Hire industry.

Who is liable if you can't return your hired car on time?

Recently Avis have come under attack after a driver in Australia was charged $158 extra when she returned her car late following Cyclone Debbie - but who is really liable in these cases?

So you can easily imagine the situation Victoria Cao found herself in when the Cardiff resident visited Australia recently.

Having hired her car from Avis in Brisbane she planned to travel down the stunning East Australian coast - but found her plans rudely interrupted when Cyclone Debbie struck - leaving her stranded in Rockhampton unable to reach the car hire station.

She, very sensibly, contacted Avis, but was surprised to learn that they planned to charge her for the extra days she would forced to rent the car for. This meant that on top of the $500 she had paid for the original hire period she would now have to pay an extra $158. 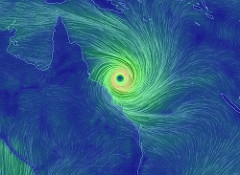 Following a short and very effective social media campaign, which lead to Victoria's car hire story reaching the national papers Avis relented - but if you are in a similar situation what are your rights?

Technically Avis is correct - in the terms of any car hire agreement it will state that if you return the car after the agreed time you are liable for extra charges potentially including:

This is because cars being returned late cause a logistical headache for hire firms, particularly in peak season. To maximise their returns when you drop back your car a car it can be turned around and back on the road with another renter within an hour. And when fleet numbers are being stretched to the maximum that can mean one car arriving late can mean an unhappy customer standing at the rental desk wanting to know why the car they have booked is not ready.

So car rental firms do discourage, through penal rates and fees, the practice of returning your car late.

But what happens if you, like Victoria, have no choice? If for example you are advised not to travel due to weather conditions.

Well firstly do as Victoria did and keep your car hire firm in the picture. They are very unlikely to be sympathetic if they are not sure where you are delayed due to the weather or have just done a runner with their car.

Secondly appeal to their better nature - and ask to speak to the branch manager if possible - desk staff do not automatically have the authority to waive fees - managers often do.

If you still have no joy and have bought through a Car Hire Broker discuss the situation with them - we at Clarify Car Hire (our in house brokerage) have great relationships with the car hire companies we offer, normally at a senior level, and a quick chat between us can often work wonders.

If you are using a big name with a UK office go through the complaints process that will be detailed on their website. If that fails too then you have social media or an appeal to a consumer champion such as Gill Charlton in the Telegraph or
Miles Brignall in the Guardian to fall back on.

Please do however ensure your request is reasonable. Every year we see cases where late returns fees have been levied either because people have just underestimated the time that it will take to get to their drop off point, or where they appear to be pulling a fast one - saying they will return the car at 2 p.m. ready for a 6 p.m. flight, to save a days car hire charge - and then arriving back at 4 .p.m - we can pretty much guarantee that sympathy will be in short supply if thats the case!

Any questions? Why not 'Ask Mark'?

- Who is liable if you can't return your hired car on time?

- Which is the better option? Snow Chains or Winter Tyres

- Why Full to Empty Fuel Rules have changed for 2015

- Key Replacement Cover - is it worth it?

- How volcanic eruptions can affect your car hire

Car Hire Champion aims to inform its visitors through its journalistic sourced information, but things change rapidly in our market and we cannot guarantee everything will be perfectly up to date. Please do be aware you use the information at your own risk, that the information provided is not financial advice and that your own independent research is essential to make sure that any product or service used is right for your circumstances. We cannot accept liability for any decision you take as a result of information provided on Car Hire Champion or through its intactive services. This service is free to you but to operate this service Car Hire Champion may receive commissions from the partners you are referred to.